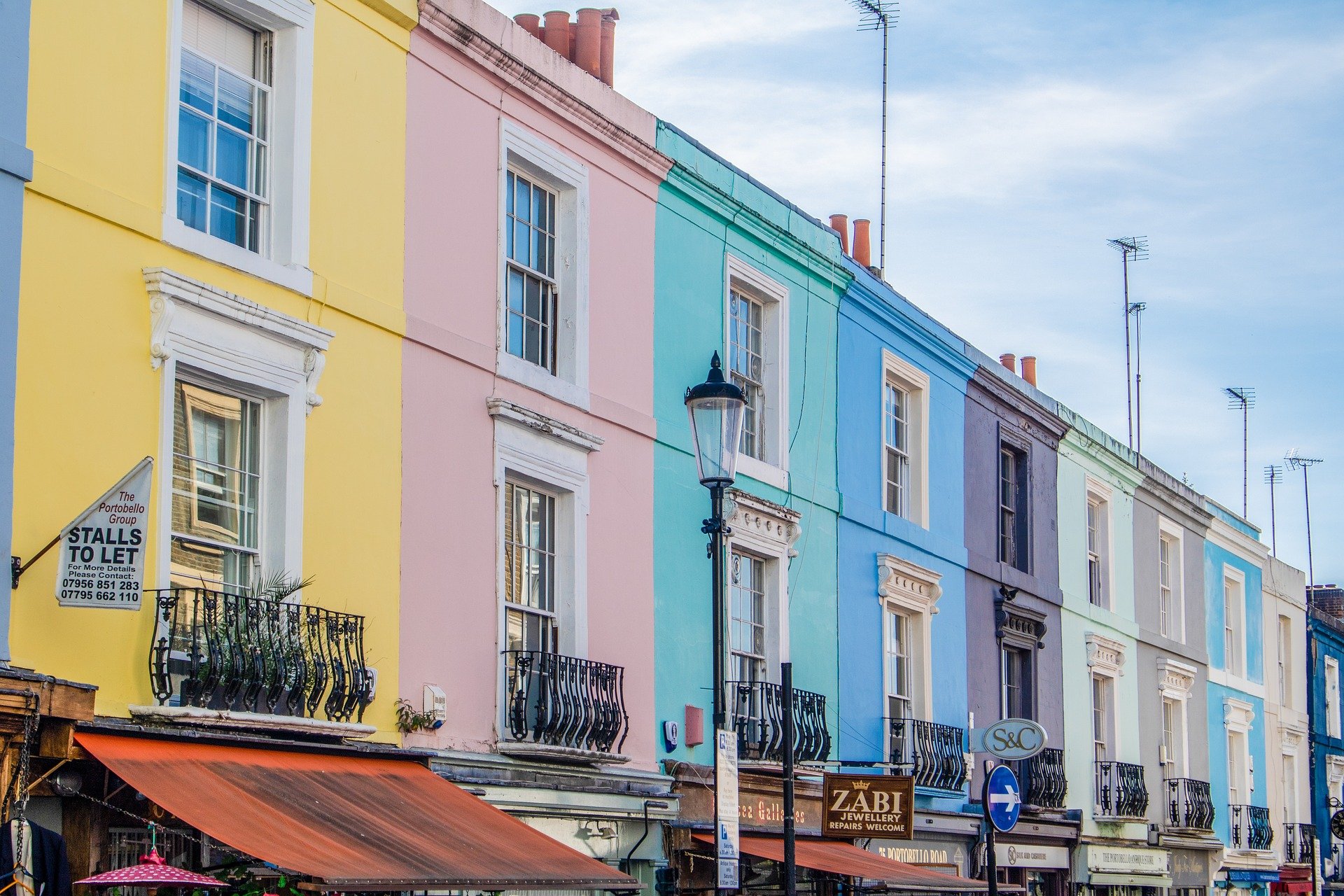 Notting Hill is one of London’s most iconic neighbourhoods. It is probably best known as host to the world’s second largest carnival, after Rio’s Mardi Gras, and is home to the famous Portobello Road Market. Notting Hill is a top spot for those wanting a cultural London experience. Every year the carnival attracts over a million revellers in a magnificent celebrations of West Indian culture. The local streets are packed with vibrant costumes and floats made by residents, steel pan bands, huge sound systems, and a huge range of food stalls serving all things Caribbean.

Over 50 years it has transformed from an edgy area with densely packed social housing into a very sought-after hotspot, with its tall terraces now returned to family homes and price tags in the millions. However, the trail of tourists rummaging among Portobello Road stalls has remained a constant. Notting Hill’s renowned garden squares offer residents direct access without having to even cross the road!

Notting Hill is four miles west of central London with North Kensington to the north, Bayswater to the east, Kensington to the south and Holland Park to the west. It is popular among many entrepreneurs from the US and Europe as well as the UK.

Portobello Road is a big hit every weekend, with crowds occupying the two-mile stretch. Colourful terraces are interspersed with a selection of antiques shops, historic pubs and clothing stalls. Among the fashion markets are the equally old-fashioned produce markets selling the freshest fruit and veg, adding to the Dickensian air. There is further shopping action just off Portobello. Books for Cooks on Blenheim Crescent is a trove of food-related books with a café out back for light lunches and tea. Fashionistas should also head to Westbourne Grove and Ledbury Road where they will find the streets littered with high-end boutiques and children’s shops. They will also find Paul Smith’s three-storey flagship store, crammed with artwork from the famous British designer’s personal collection.

At weekends the best place to find amazing street food is Acklam Village Market where there is regular live entertainment, and for those who fancy a different Saturday experience, the Provenance Village Butcher on Kensington Park Road holds regular classes to teach people the fine art of carving.

The luckier residents of Notting Hill have access to one of the private garden squares, others can take their dogs for a walk in nearby Holland Park and Hyde Park. For a more relaxed outing, Gate Theatre on Pembridge Road is a leading fringe venue and the Print Room fringe theatre is now located at The Coronet in Notting Hill Gate. The two local cinemas are the Gate Picturehouse in Notting Hill Gate and the Electric Cinema on Portobello Road, owned by Soho House.

There are also a variety of leisure centres in and around Notting Hill. The Kensington Leisure Centre has a range of facilities and activities catering to all ages and abilities and is located just a short walk from Ladbroke Grove and Latimer Road Tube stations. The centre has a large 120 station gym, free weights section, cardio zone, 3 pools, café and Spa. There is also a Virgin Active located on Lancaster Road in Notting Hill.

1. Thomas Jones Primary School is a mixed gender community school serving a culturally and linguistically diverse community. In recent years the school has invested in the arts, sport and the purchase and replenishing of quality books.

2. St. Mary of the Angels RC Primary School is a voluntary aided school supporting approx. 297 pupils aged 3 – 11. Children in the Early Years Foundation Stage are taught in a Nursery and two Reception classes, and there is an on-site breakfast club.

3. Holland Park School is a secondary school with a large sixth form and was converted to an academy in 2013. The academy uses Walmer Road School, Golborne Youth Community Centre, The Latimer Education Centre and The Portobello Centre as alternative providers to support a small number of students. The academy has also been awarded the Investor in People Gold Status.

4. Paddington Academy opened in 2006 and moved into a new building in 2007. The academy has specialisms in media, performing arts, business and enterprise. It was also awarded Healthy Schools status in 2010.

Sitting west of central London, Notting Hill has easy access to Heathrow airport as well as the M4 and M40 motorways. It is also well served by the Tube network as Notting Hill Gate and Holland Park are on the Central line, with trains to Bank. Latimer Road, Ladbroke Grove and Westbourne Park are on the Hammersmith and City, and the Circle lines with trains to Moorgate. There are also useful commuter buses; the No.7 to Oxford Circus, No.23 to Liverpool Street via Oxford Street and the No.52 to Victoria.